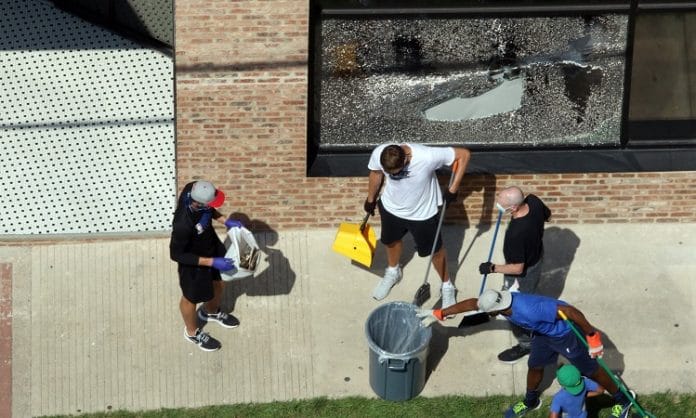 The pair worked alongside other volunteers, business owners, and staff helping sweep up glass and performing other clean up tasks. Dirk even posed for some photos with fans he was helping.

Dirk helping out the community in Deep Ellum 💪🏻💙 Along side my cousin (left” and the beauty shop she works for. LETS GOOOO !! 🙏🏻🙏🏻 @swish41 pic.twitter.com/jCTJPiDCBm

There has not been any official word from the Dallas Mavericks or from representatives of either of the two on the clean up efforts. However, Mark Cuban was spotted marching along with peaceful protesters over the weekend and Dirk has made a statement of support on his social media for positive change.

Where ever your thoughts are on these recently passed events, we can all agree this gesture of helpfulness and volunteerism is just what we need right now.

Update:
Dirk and a Dallas Police Officer work side by side on clean up in this video from the Dallas Mavericks

Taking action together to rebuild our community 🤝 #MFFL pic.twitter.com/D1kGS6lWPm