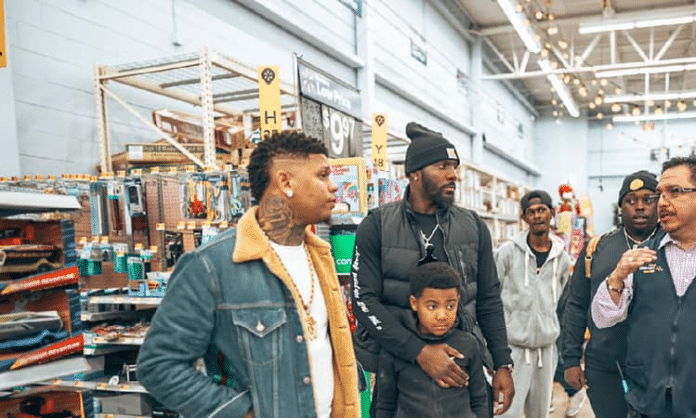 Editor’s Note: We’ve confirmed the reports and updated this article with additional information, including that Dallas musical artist / rapper Trapboy Freddy also helped out with the toy buying.

Dez Bryant made a post to his Instagram today showing a picture of him and Dallas-based rapper Yella Beezy talking with Walmart employees. In the post Bryant says they “bought out the Walmart for the kids”, making it sound like the pair purchased all of the toys at the store or something else. After several hours we were able to confirm that Dez did indeed purchase a large quantity of toys from a Walmart on Cockrell Hill Rd. in Dallas’ Oak Cliff neighborhood. It was later confirmed that a third person aided the duo, rapper Trapboy Freddy (who was apparently running late).

Video of the three doing their part to help kids this Christmas was later posted to YouTube by the “NFL Season” and a shorter version to the channel “HustleHearted”. In the video, which appears to be shot by Yella Beezy himself, you can see the guys buying pallets of toys and talking with Walmart employees.

Here is the YouTube video of Dez Bryant, Yella Beezy, and Trapboy Freddy buying pallets of toys to give to kids for Christmas

Shorter video (only a 1 minute, 364 second excerpt) from “HustleHearted”:

The trio purchased all of the toys the Walmart on Cockrell Hill Rd. would allow them to. Here’s a post from that Walmart’s Facebook page:

You Can Now Order MrBeast’s Delivery Only Burgers in Dallas, Houston, Austin and Surrounding...

Sip on Texas Beers to Help Save Wildlife Animals at the Houston Zoo this...