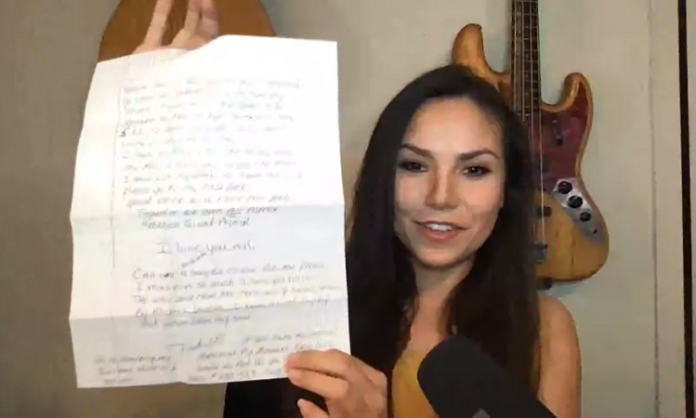 Texas Country music radio host Michelle Rodriquez, who btw totally rocks, of KSCS 96.3 in the Dallas-Fort Worth area contemplated writing the star of Netflix’s “Tiger King” and current prison inmate, Joe Exotic, after she finished watching the documentary series. She took to Twitter to let her fans know of her state of contemplation, and got an incredible response.

Her fans really wanted her to go through with it to see what would happen.

Just do it lol

The next day she caved in and decided to go through with writing him a letter and mailing it. She had heard rumors he would only read letters and reply if they contained money, but decided to take her chances and send the letter without any money.

The letter is in the mail. We shall see if a response ever comes, with all the fan mail he must get. I’ll keep ya posted.

There was no guarantee that Joe would write her back. He’s probably getting bombarded with letters since the show started streaming on Netflix. While we’ve heard about a lot of fans writing him, we have yet to have seen any Texans get a reply.

10 days later Michelle a big surprise when the USPS sent her a preview of a letter coming in her mail that day from “Joseph Maldonado Passage” (aka Joe Exotic) and shared her excitement with Twitter.

You guys! Look what’s coming in the mail today. Looks like Joe Exotic wrote back 👀 pic.twitter.com/UydxTXRXso

Once she picked up her mail she took a shot of tequila and went back to Twitter and let everyone know she planned to read the letter from Joe Exotic on her Facebook via a live video stream. We watched the live stream and it’s largely about him hoping he gets a pardon from President Trump and has a chance to take his cats back from Jeff Lowe, along with various other things about his case and the show itself.

Are you curious what the letter said or what it looked like?

Check out this video where she gives more backstory and insights on the letter and it’s contents and reads most of it. Some of it she’s saving for the radio, because, well she’s a radio host.

If you want just Michelle reading Joe Exotic’s letter skip ahead to 4:25 in the video.