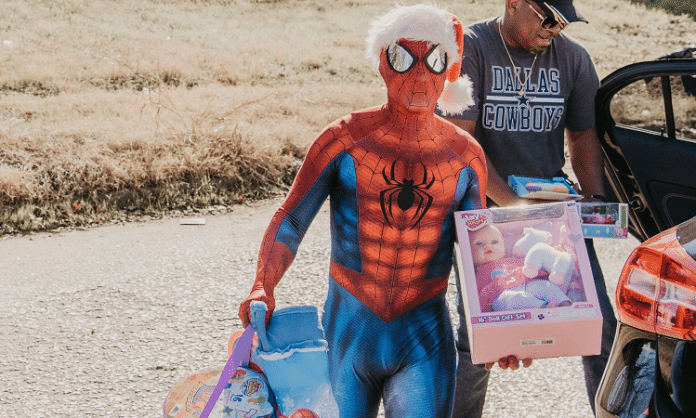 Article navigation: Gallery | How You Can Help | Interview | Video

In Dallas, TX a real-life hero is set on making Christmas the best it can be for under priveglaged kids in the area. You might know him as Jantzen Ray the owner of production studio Dallas On Air and as a cameraman on the TV show Cheaters, but to Dallas area kids on Christmas morning he’s Spider-Man filling in for Santa Claus.

The program is called “A Very Spidey Christmas” and it all started 5 years ago as Jantzen’s business was collecting toys for the annual Toys for Tots toy drive but volunteers for the organization never arrived to get the toys.

Then he had an idea. A wonderful idea. Jantzen had an amazing, wonderful idea. What if he dressed up like Spider-Man and drove around South Dallas handing out the toys to kids on Christmas day?

That Christmas Jantzen and his crew of Spider-Elves drove around filming their random giving when they happened upon a little girl standing outside. The girl and her family were living in a car at the time. When Spider-Man surprised her with toys she started jumping up and down with joy. The video of this encounter went viral, for all the right reasons, and a new tradition was born.

“We don’t have millionaires helping us.” – Spider-Man Santa

Each year local businesses act as dropoff locations for toys which Jantzen and team then pickup and handout while randomly cruising around poverty-stricken parts of Dallas. It takes several cars and helpers every year to pull off the holiday surprise. As Jantzen told us in an interview (see below), there are no millionaires invovled. This is just a group of people in Dallas who wanted to do something great for kids on Christmas day. For many of the kids who get a toy from Spider-Man Santa and his crew of helpers it will be the only Christmas gift they recieve.

How you can help

2. Donate a toy or two at any of the dropoff locations for the event.
Donation Dropoff Locations for A Very Spidey Christmas 2020
Dropoff a toy for a kid in need at any of these local Dallas-area businesses

3. Volunteer to help.
If you’d like to be a hero to local kids and help with this Christmas morning giving, then send the team a message via their contact form: https://www.averyspideychristmas.com/contact

We sat down with Jantzen socially-distance (i.e. through email) and asked a few questions about A Very Spidey Christmas. You can see the answers below.

Texas is Life: What made you decide to start handing out gifts to kids dressed like Spider-Man?
Spider-Man Santa: So the first year we did this, Dallas On Air did a toy drive for Toys for Tots. We set up several times for them to come pick up the toys but they would never show. It was the day before Christmas and we had all these toys and wasn’t sure what to do with them and the idea just hit me to dress up as Spider-Man and drive around South Dallas giving them out to kids in need.

Texas is Life: In 5 years of doing this are there any memorable moments that really stand out?
Spider-Man Santa: Yes and it was captured on video, went viral and is why we continue the tradition. We had gone live on facebook and the video touched a lot of people. So Year One we see this little girl standing outside and pull over to surprise her with toys. She immediately starts jumping up and down with joy and freaking out! Her reaction is PRICELESS. Well what you can’t really see in the video was her and her family were living in a car. We gave her and her siblings the only gifts they got that Christmas. In fact we provide the only xmas gift to a lot of the kids we reach, which is our motivation each year.

Texas is Life: Why Spider-Man?
Spider-Man Santa: It’s because I’m short! It’s the only superhero I could successfully pull off! Could you imagine a 5’4 batman?!

Texas is Life: How has the community response to A Very Spidey Christmas been?
Spider-Man Santa: The community’s response is the only reason we are now on year five of A Very Spidey Christmas. We couldn’t have done a single thing without the help and support of the community. It really is amazing how average people can come together and make this happen. We don’t have millionaires helping us. We haven’t had major corporations helping us and we aren’t a major 501c3. Yet every year we are able to make magic happen purely by the will of the community. In a time when our country feels so divided, I think EVERYONE can agree that helping a kid feel just a little bit of joy is a worthy cause.

Texas is Life: Do you have any helpers? Do they also dress up? We’ve heard a dog is involved too…
Spider-Man Santa: We do indeed have helpers and again we couldn’t do any of this without them. We have a handful of volunteers who drive around with us helping us give out toys and take pictures/video. We have a lot of toys and need several cars to follow us around. Cole and Cat Houston from The Rantcor Pit are 2 fine examples of our amazing helpers. They have been helping us since the 2nd year. On Year 2 I bought a better Spidey suit and we had Spider-Girl join me but for the most part it’s just been Spider-Man in costume. However next year my spidey sense is telling me I might have a little help from another hero or two!

Oh and yes cant forget about [the dog] Anakin aka Spider-Dog aka Spider-Manny! He will be tagging along this year as well!

“Then we hit the streets of South Dallas and just drive around looking for kids to surprise.” – Spider-Man Santa

Texas is Life: How do you determine what kids get presents / or what present each kid gets?
Spider-Man Santa: We always offer our help to anyone who reaches out to us and isn’t too far away. We typically have a small list of houses we go to first. Then we hit the streets of South Dallas and just drive around looking for kids to surprise. It’s random but honestly it’s my favorite part. The surprise on their face is greatness! I love jumping out of my car as Spider-Man yelling “Merry Christmas!” I always tell the kids that “Santa was behind on delivering gifts that year so he called Spider-Man in for a little help. Sorry we couldn’t get here sooner but we’re here now!”

I really hope we have the chance to drive around South Dallas again this year. The reason I say that is this year is the first year that our list of houses to go to is long. Really long. Our first house is down in Waxahachie so I’m just hoping we have enough for our South Dallas kids. I want to work all day long on Christmas Day! My dream is to one day see a kid we had given a gift to from a prior year! I want to hear “Spider-Man is back!!!!”

Video of All the Toys and Gifts Purchased for 202

Fort Worth Teacher Donates 14 Inches of Hair for the Second Time 3 Years...