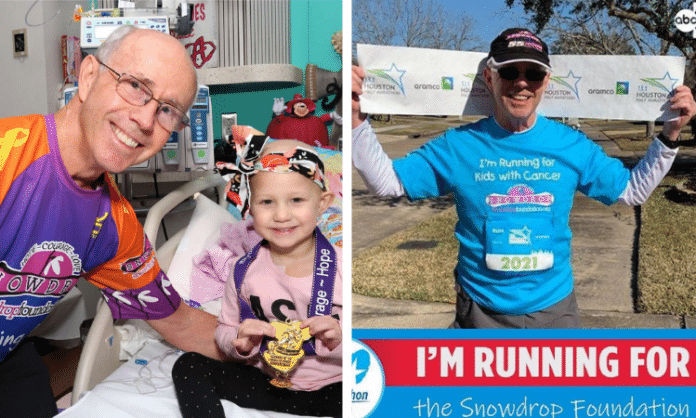 This Fort Bend County runner makes it his mission to help provide scholarships for cancer patients and cancer survivors one marathon at a time.

In Missouri City, Texas, a runner named Larry DeSpain gives hope for cancer
patients and cancer survivors to receive a college education. DeSpain has managed to raise a whopping $300,000 for the Snowdrop Foundation – a foundation whose main goal is to help cancer patients and childhood cancer survivors go to college through scholarships.

Larry Despain was first introduced to the Snowdrop Foundation 14 years ago. In addition to raising pediatric college funds, the foundation also raises awareness and finances research aiming to cure cancer for children in Texas Children Cancer Center. DeSpain has become the third leading fundraiser for the organzation. During his first year, he was able to show dedication and success by earning $3,500 – a large feat for a beginner.

Aside from his work with the Chevron Houston Marathon, Despain also started his program called Bling for Bravery. With this initiative, he assembles old and used race finisher medals, refurbishes them by adding new ribbons and gives it to young patients to honor their strength as they fight their illnesses. It might seem like a simple act, but it
symbolizes these children’s strength to combat the disease and is also a fulfilling and meaningful experience for these children to receive a medal.

Larry DeSpain undeniably embodies the caring Texas spirit and is the human epitome of hope for cancer patients and cancer survivors with all these initiatives. We look forward to seeing his continued work!

Popeyes is Out of Chicken Sandwiches in Texas

Fort Worth Teacher Donates 14 Inches of Hair for the Second Time 3 Years...

An Anonymous Texas School Employee Bought a Student a Trumpet After Seeing the Kid...