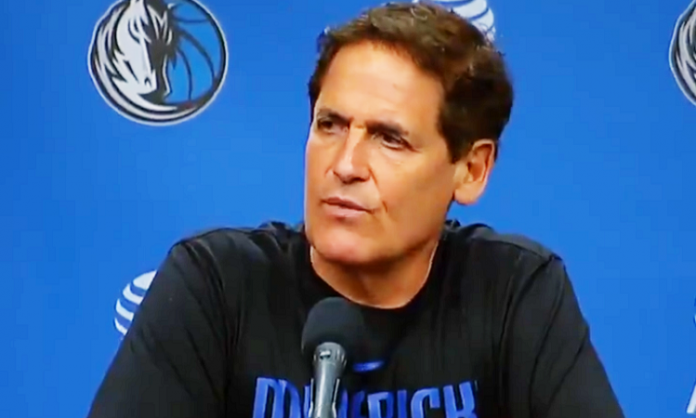 Update: At 5:28pm today the Mavericks PR Twitter handle tweet this graphic showing this is moving forward. The tweet was of a graphic that reads: “In light of the postponement of the NBA season, it is of utmost importance to Dallas Mavericks management and ownership that we do what we can to minimze the financial impact that will be felt by staff who would otherwise be working at our games at American Airlines Center.

As such, the organization, along with American Airlines Center leadership, is currently making arrangements to ensure that scheduled event staff will recieve payment for the six home games that were to take place during the 30-day NBA hiatus. As part of its mission to provide financial piece of mind, Mavericks jersy sponsor Chime, the leader in U.S.A. challenger banking, has allocated funds to support this effort.

Event staff includes security, police, parking attendants, housekeeping, in-arena entertainers, and guest services staff, among others. It is our hope that this will allow our valued team members to satisfy their economic needs during this unprecedented time.

In addition, the Mavericks and jersey sponsor Chime share a commitment to their local communities and are working with our current nonprofit partners to identify suppport and service opportunities throughout North Texas at this time.”

The Dallas Mavericks issued the following statement today regarding the continued payment of hourly staff who work Mavericks’ game nights at the @AACenter: pic.twitter.com/2aAvzGwraM

As reported by Dallas Sports Fanatic, last night after Mark Cuban found out about the NBA shutdown over COVID-19 / Coronavirus concerns he commented that he and the Dallas Mavericks staff immediately started trying to figure out how to help the hourly employees of the American Airlines Center in Dallas that would feel the largest blow to their income from the shutdown.

Mark Cuban says he's going to put a program in place to take care of Mavericks concession workers and others making hourly pay who will lose work time due to NBA coronavirus shutdown pic.twitter.com/hbCWnMI8H5

“I’m concerned about the, ya know, now that we’re not playing games, what about all the people who work here on an hourly basis. Ya know, we’ll put together a program for them.” – Mark Cuban

During the post-game interview Cuban continued

“…I reached out to the folks at the arena and our folks at the Mavs to find out, ya know, what it would cost to support, financially support people who aren’t going to be able to come to work. Ya know they get paid by the hour and this was their source of income. And so we’ll do some things there. We may ask them to do some volunteer work in exchange, but ya know we’ve already started the process of having a program in place. I don’t have any details to give, but it’s certainly something that’s important to me.”

“I reached out … to find out what it would cost to financially support people who aren’t going to be able to come to work.”

–Mark Cuban on his plan for Mavericks employees during the NBA suspension pic.twitter.com/McOl1vHUqO

While the details aren’t all there yet, this is an incredible gesture from one of the wealthiest and nicest people in North Texas. This also isn’t out of nature for Mr. Cuban who has a long record of jumping in and helping out during times of struggle.

The Dallas Mavericks won their game over the Denver Nuggets 113-97.

Drinking for a Cause: Gruene Music & Wine Festival 2021