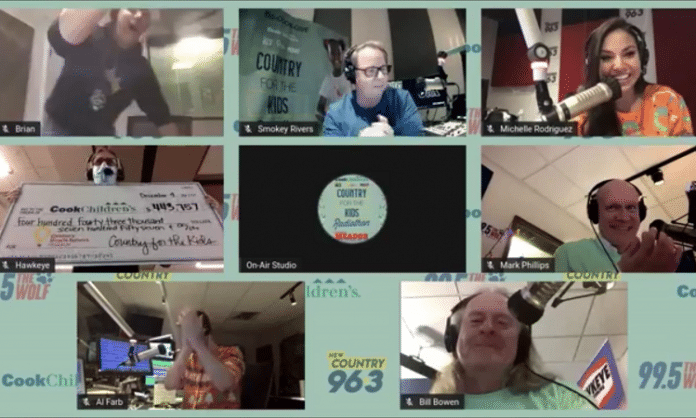 96.3 KCSC and 99.5 The Wolf, two country music stations in the Dallas – Fort Worth metro, teamed up for the event called “Country for the Kids Radiothon”. The event had both stations broadcasting and streaming simultaneously with live on air stories from children and families that have been impacted by Cook Children’s. During the 2-day long event the stations shared playful banter and moments with each other and continually called on North Texas country music listeners to donate with a phone call or a text message. The event also included an auction where the stations sold off items to help raise money.

Country musicians even popped in (virtually) to help the cause like Chris Janson seen in this video from KSCS:

By combining forces KSCS and The Wolf helped bring in a record setting donation haul for Cook’s Children, a whooping $443,757, which will go on to help countless thousands of children in the DFW community.

Thank you for everything North Texas. Together we raised $443,757 for our Country For Kids Radiothon for @CookChildrens! A historic radiothon, New Country 96.3 & 99.5 The Wolf coming together for the first time ever, for this great cause. pic.twitter.com/Cscn11pAEg

We first heard about the Radiothon when one of our favorite Texas country radio hosts Michelle Rodriguez showed off her Whataburger Christmas sweater on Twitter.

I love @whataburger, sweaters & kids 🤣 this one can be yours! Part of our auction for our “Country for Kids Radiothon” benefitting @CookChildrens. We kick things off tmrw on @newcountry963! Bid at https://t.co/oHhL5zxo2t pic.twitter.com/skLMD9RIJc

A Texas Radio Host Got a Letter From Joe Exotic and Read it On...