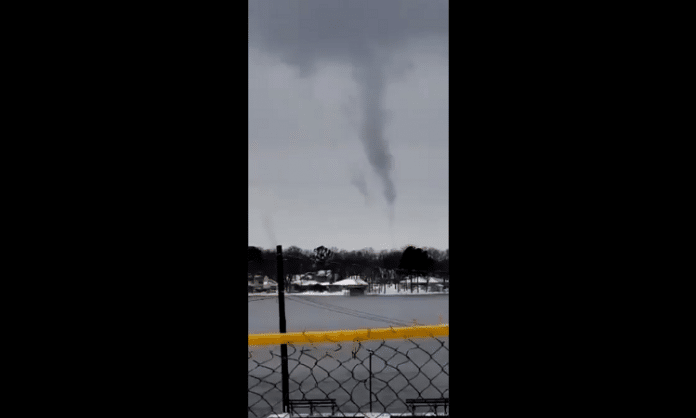 A Texan at Cedar Creek Lake out by Gun Barrell City witnessed one of the rarest weather events in Texas, a snownado. That’s a tornado in snowy conditions.

As the polar vortex winter storm continues to blanket the entire state (yes that is factually correct) in snow and icey conditions it shouldn’t surprise any Texans that mother nature wanted to kick things up a notch by tossing at least one snownado at us.

A witness recorded this video of what you could call a snownado over Cedar Creek Lake near Gun Barrell City in East Texas this morning. The small tornado/waterspout was seen over land and water for a few minutes before dissipating despite single digit temps and snow on the ground pic.twitter.com/OhRgurDm7Z

The footage was shared on Twitter by CBS 11 reporter J.D. Miles and wow is it something to see!

Another photo of the Texas snownado

Here’s a photo taken by another witness of the “snownado” in East Texas this morning pic.twitter.com/GiKik8c62A

Featured photo a screenshot of the video tweeted out by J.D. Miles

7-Eleven Opens Its First Ever Drive-Thru Store in This Texas City Where You Can...

The San Antonio Spurs Now Have a Food Truck