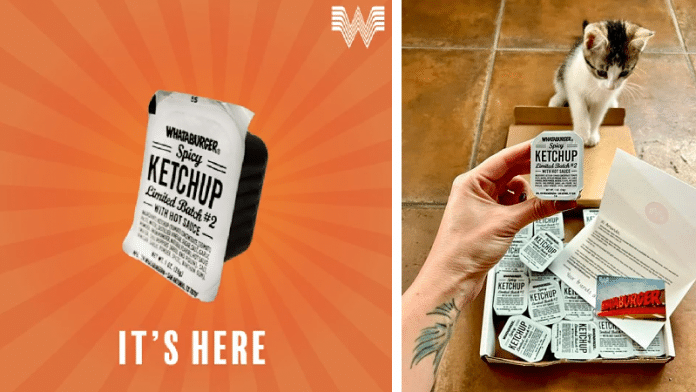 A week before Christmas Whataburger started teasing a new food product. Theories about what it might be took the Texas corner of the internet by storm with a deluge of guesses, including some that were really close like a person who guessed “Ghost Pepper Ketchup” and some were hilariously far off like when we guessed “Chicago Deep-dish Pizza”.

Then just before the end of the year someone on Facebook claimed to have leaked a photo showing the new product called “Spicy Ketchup Limited Batch #2 With Hot Sauce”. Some thought the photo looked photoshopped and group moderators kept removing the photo ahead of the big reveal. Over the weekend an ‘influencer’ that goes by “S.A. Foodie” showed a picture of a box of the ketchup apparently sent to her by Whataburger.

Finally Today, Monday the 3rd of January, Whataburger has confirmed that indeed this is their new limited sauce item.

It's HERE! Introducing the all-new Spicy Ketchup Limited Batch #2! This new batch won’t last long, so get it while you can – your fries will thank you. pic.twitter.com/m3B1liMU4O

We aren’t exactly sure how limited this new ketchup is in terms of quantity and availability (We have asked Whataburger on Twitter), but we’ve been told by a few Whataburger employees that all restaurants seem to have at least several boxes full of them. You might have a few weeks or a few months to try the new ketchup, but we would recommend die hard Whataburger Fanatics get out and try it asap – note: we are also being told it may not be available until 3pm today.

Reactions to the new ketchup so far:

Yeah, that'll do it

Featured photo a compilation of a video screenshot from Whataburger’s announcement video on Twitter and S.A. Foodie’s photo, both embedded above