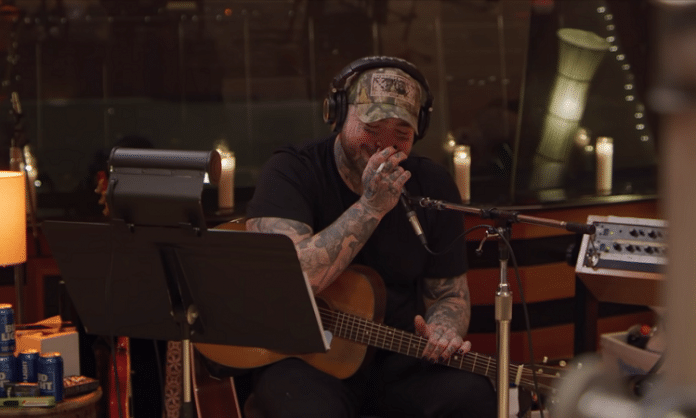 Viewers of Matthew and Camila McConaughey’s virtual “We’re Texas” benefit were given a special and unexpected treat when the hip-hop/rap artist best known for his face tattoos covered two country music songs including Brad Paisley’s “I’m gonna miss her”.

For those who are not aware, Post Malone grew up in Grapevine, TX after his family moved here from upstate New York when he was a kid. His father worked for the Dallas Cowboys for years. Post worked at a local Chicken Express and debuted his first mixtape while attending Grapevine High School. It’s clear his time in Texas influenced some of his eclectic musical tastes, including this surprising enjoyment of Country Music.

“This is going to be fun for me because I never get to play with, ya know, like a full fucking band.”

Before he started playing Posty was quoted as saying “This is going to be fun for me because I never get to play with, ya know, like a full fucking band.” Post showed up in a Johnny Cash-esque all black outfit complete with black cowboy boots – except for his camoflauge ballcap and started drinking a Bud Light and smoking a cigarette as he performed along with a full band.

After Brad Paisley’s “I’m Gonna Miss Her” Post and his band played “You Can Have the Crown” by Sturgill Simpson a member of the sub-genre typically called ‘Outlaw Country’.

Here’s the original version of Sturgill Simpson’s “You Can Have the Crown” so you can compare the performances.

Post Malone’s performance along with other musicians like Kelly Clarkson, Khalid, Willie, and Leon Bridges helped the virtual benefit raise over $7.5 million for winter storm relief here in Texas through the McConaughey’s “Just Keep Livin” foundation.

In between songs Post Malone said it was one of the top 10 best days of his life.

[Video] New Selena Remix of ‘Como Te Quiero Yo A Ti’ Released Along With...