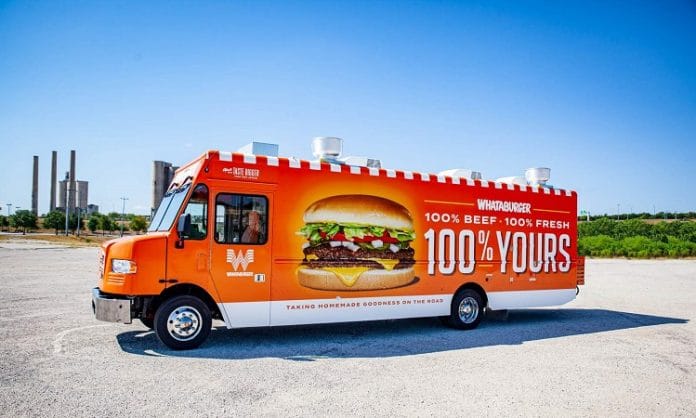 The most favorite fast food restaurant in all of God’s country (i.e. Texas) now has a food truck.

Whataburger unveiled their newest addition as part of a celebration for their 70th anniversary during an event for educators on August 6th. The food truck is a marvel coming equipped with a 4 foot grill powered by a 30,000 watt generator, enough power and space to make burgers on par with a normal Whataburger restaurant.

“From all of us to all of you, thank you for the last 70 years” – Whataburger CEO, Ed Nelson

The food truck was brought to life for the San Antonio based restaurant by Cruising Kitchens, a fellow Texas-based company that specializes in building food trucks and it comes with a custom paint job that matches Whataburger’s iconic style with matching custom LED lights.

Some have speculated the truck will be used to introduce Whataburger in other states as the Texas favorite begins its latest expansion. Another speculation is that this food truck, or possibly a fleet of similar ones, could be deployed by Whataburger to natural disasters to serve hot meals to those helping or surviving the tragedy, similar to H-E-B’s mobile kitchens.

The food truck was originally announced prior to the unveiling as part of a press release on the Whataburger website that included other tasty details from the brand including:

This beauty was unveiled yesterday at an event celebrating San Antonio teachers! We can't wait for our fans across our footprint to see the Whataburger Food Truck! Read more at: https://t.co/NC3IVoIP7G pic.twitter.com/swGF1W9KNl

A Tiger Was on the Loose Recently in San Antonio