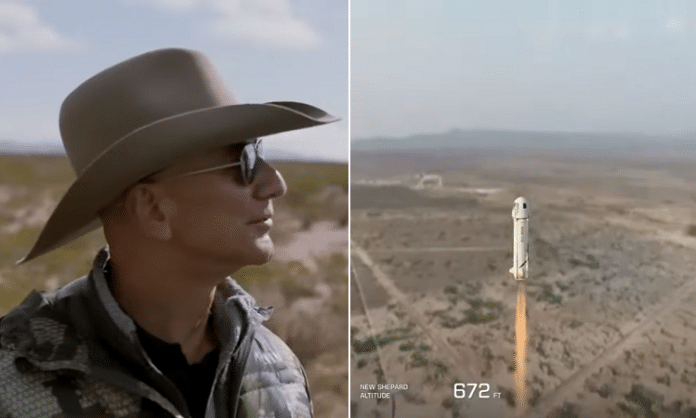 Jeff Bezos is related to one of the most famous Texas musicians of all time, George Strait. He’s also done well for himself with an ecommerce business after growing up in neighboring New Mexico becoming the world’s richest person and building a reusable rocket company.

Today Van Horn, TX which has a population of 2,063 and probably way fewer traffic jams than Austin, Houston, or Dallas is being talked about around the world. (editor’s note: Blue Origin rarely mentioned the city of Van Horn and simply referred to the region of West Texas)

All of this is thanks to a guy named Jeff Bezos who launched a historic space flight from a facility near the city today. The flight was historic for a few reasons, it not only carried the world’s richest person (and shockingly accurate Lex Luther cosplayer) off of the world briefly but also because it carried the oldest and youngest person ever to go into space as well as the world’s fist commercial passenger into space. This was also the first space tourism flight to pass what is known in the space community as the Kármán line, where Earth’s atmosphere gives way to outer space.

If the name Jeff Bezos rings a bell, it’s probably because you’ve heard he is sort of related to George Strait through their mutual ancestor John Joseph Strait as explained here by Taste of Country. Oh, and you probably buy stuff from the company he founded in the 1990’s quite frequently.

Jeff has recently retired from the major ecommerce platform company he built in Seattle, WA and turned his focus to his burgeoning commercial space business Blue Origin. Blue Origin is one of three newcomer space tourism businesses actively working to get humans into space for short-term tourism space flights including Virgin Galactic (which does not operate at a Galactic scale) and SpaceX which has been launching rockets blowing up starships in Boca Chica, TX for the past year now as they develop their technology further.

While Texas made history today, it would seem at least two of the billionaires investing their money into space flight tourism are likely to keep launching from Texas and our state could set even more spaceflight records in the near future.

A screenshot of Jeff Bezos wearing a cowboy hat. He wore the hat while entering the rocket and after exiting the capsule when it returned to Earth. This marks the first time a cowboy hat has been taken into space, fittingly from Texas soil too. 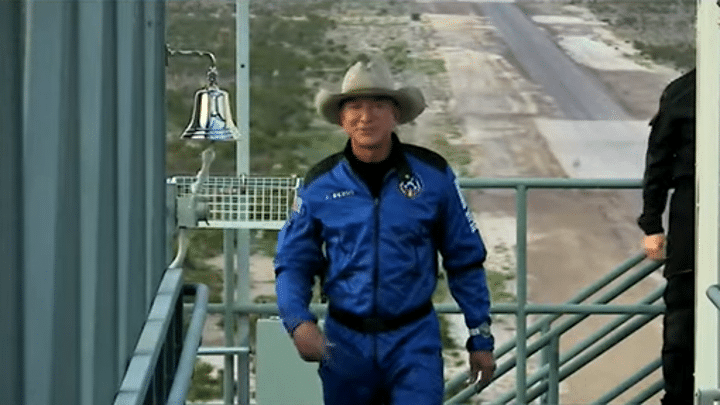 Featured photo a compilation of screenshots from the official Blue Origin webcast by Texas is Life. Cowboy hat photo also a screenshot from the Blue Origin stream.

The Texas Hill Country Rang in the New Year With Snow

There’s a McDonald’s Test Near Fort Worth That Delivers Your Food Via Conveyor &...