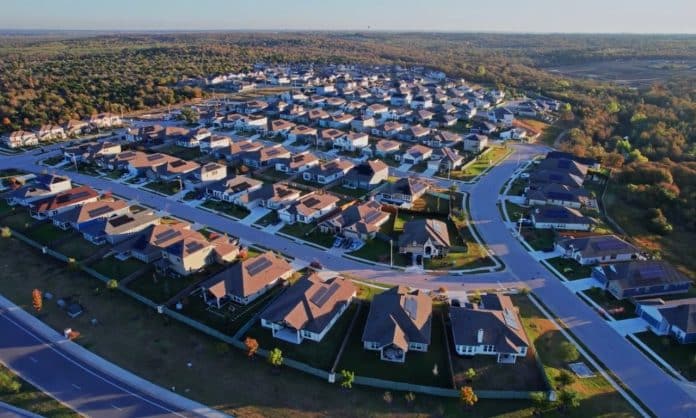 There are several sides to the “green” debate, the one that gets the most attention is usually the environmental aspects, but the other one is the potential financial savings that might come with it for average consumers. The argument has always been however, that to save a few hundreds dollars per year a household needs to invest tens or hundreds of thousands of dollars into green tech that might end up being obsolete in a few years.

A new 7,500 home development outside of Austin, TX called Whisper Valley wants to change that by building homes that take energy efficiency into consideration from below the ground up. The development started off by the home builders boring holes deep down into the Earth, about 300-feet, by every plot where a home would be built. Then they connected these holes with piping to funnel the Earth’s constant internal temperature (roughly 72°F to 74°F) to each home in the network, creating the biggest known geothermal grid in the world.

Each home then uses a small amount of electricity to pump water around their geothermal bore hole to keep the house at a constant internal temperature. According to CNBC’s coverage (see below) the geothermal system will cut electricity usage by 80% when compared to a standard HVAC system for a similar building. For some home owners this could mean huge savings simply by moving in, the homes won’t be as reliant on the ERCOT grid, and overall they should reduce the energy consumption per household in the area. In fact according to the Whisper Valley website they believe some homes in the development could be “zero energy capable” a way of saying the home might be able to produce all of the electricity it needs from solar power on some days due to the reduced energy requirements of the geothermal system.

All of the homes in Whisper Valley come with solar panels standard on the roof to help offset the electricity usage of the geothermal units and there is an option to install an in-home storage battery to store the electricity for later usage. The homes are roughly about $10,000 more than similar homes in the area, which isn’t much when considering the liklihood of months with extremely low electricity bills.

The geothermal grid was built by EcoSmart Solutions a company based in Manor, TX. According to the website for the master planned community, homes in the development start in the $300,000’s and the first phase is already sold out.

No matter which side of the debate you’re on, saving money or saving the environment, all of us Texans want to save money on our electricity bill and ensure a nice cool home in the summer time. Having the potential of a $0 electricity bill for a nominal increase in home price is pretty attractive especially when coupled with a constant internal temperature. You really don’t have to be an environmentalist to see the attraction of Whisper Valley or reap the benefits if it delivers what it claims to.

The downside would likely be the living in Manor, TX but it is only about a 20 minute drive to Downtown Austin on Highway 290 and there’s an H-E-B on the way to the area too.

Thanks Y’all:
This story is partially based on reporting by Diana Olick of CNBC. Her reporting was largely bias-free and did a great job of showcasing the facts about Whisper Valley and the Texas company building the geothermal grid. You can read her article for more details and quotes on the CNBC website here “Largest-ever geothermal grid under this Texas housing development is saving homeowners serious money”