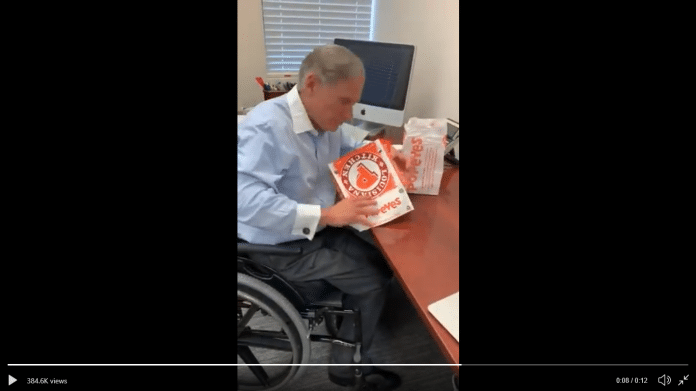 The title is click-bait, sorry bout that.

Our governor posted a video on his Twitter saying “Caught red handed… Cheating on
@ChickFilA.” and “I swear it’s a one time fling.”

The video shows a photo of what appears to be a Chick-fil-A cup on his laptop with an announcement about the “Save Chick-fil-A bill” on the monitor in the background. It’s the same photo he tweeted out prior to signing the bill into law. As the video plays the song “Your Cheatin Heart” by Hank Williams Sr. starts in the background. After zooming into this image a little the video pans to the left and we see Governor Abbott acting as if he’s been taken by surprise while jostling a Popeyes box.

There’s no evidence in the video that the Governor was able to try the Popeyes chicken sandwich which had the whole state buzzing earlier this week before completely selling out, but there’s a strong chance he was able to snag one while Dez Bryant and others will have to wait until it gets back into stores here in Texas.

No matter what your political affiliation we strongly urge you to follow the governor on social media for shenanigans like this one.

And in case you now want to hear the whole song, here’s Hank Williams Sr’s “Your Cheatin Heart”

Space Tourism History Was Made in Van Horn, TX by Some Guy Named Jeff...

JJ Watt is Dropping in On Zoom Calls

The Scariest Haunted House in Texas is Open Until Nov. 6