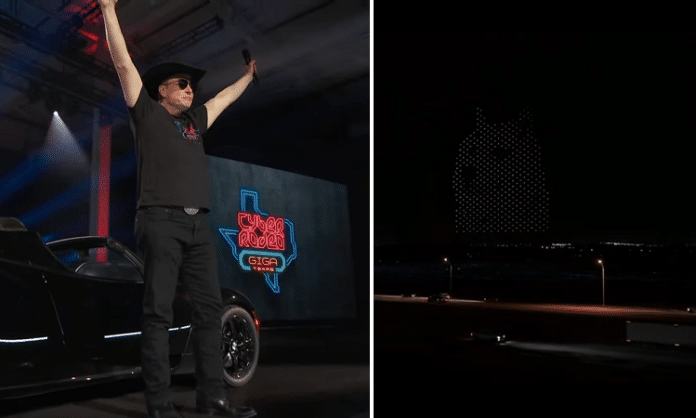 Can I get a Cyber Yee Haw!

Elon’s so called “Cyber Rodeo” the opening party for Giga Texas which was an invite only affair for his 15,000 closest friends / Tesla customers, started off with a massive drone light show over the facility. We’ve embedded a few versions of the video from YouTube below time stamped to parts you might want to watch.

The drone light show included a visage of Nikola Tesla, the early 20th century inventor Tesla is named for, a Tesla car, Cybertruck, and a few memes including Doge and the Haha Yes Hedgehog.

Once the car stops in the middle of the stage Elon Musk emerges looking very Johnny Cash like wearing a black cowboy hat, black shades, and a black Cyber Rodeo t-shirt.

The scene gets a little wild with a cut to a girl in the front row crying like she just had her face melted by Pantera and her heart melted by George Strait. Elon tosses his hands in the air like a boxer that just defended his world championship title belt while the crowd screams in excitement.

After things calm down a bit he references the black roadster behind him and tells everyone it was the first production car Tesla ever made.

This kicks of Elon’s talk portion of the Cyber Rodeo.

The talk is pretty standard stuff with a few fun tidbits tossed in. Giga Texas is freaking enormous as shown by a graphic comparing it to Burj Khalifa, the tallest building in the world (Giga Texas was turned on its side). He also states that “California is great…” (Boooo!) but goes on to say that “There’s no place like Texas”.

Unfortunately the first Tesla made in Texas didn’t come out with a pair of longhorns on the front.